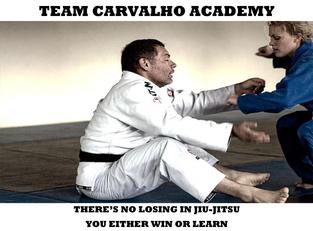 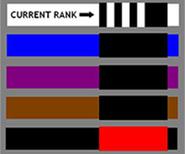 The Brazilian jiujitsu ranking system is a means of signifying a practitioner’s increasing levels of technical knowledge and practical skill within the art of Brazilian Jiu-Jitsu. Colored belts that are worn as part of the uniform are awarded to the practitioner. While the ranking system's structure shares its origins with the Judo ranking system and that of all colored martial arts belts, the Brazilian Jiu-Jitsu ranking system grew to incorporate unique aspects and themes. The system has minor differences from Judo in areas such as a division between youths and adults and the issuance of stripes and degrees. Some distinct differences have become synonymous with the art, such as a marked informality in promotional criteria, a focus on a competitive demonstration of skill, and a conservative approach to promotion.

Sport Brazilian jiujitsu's focus on submissions without the use of strikes while training allows practitioners to practice at full speed and with full power, resembling the effort used in a real competition. Training methods include technique drills in which techniques are practiced against a non-resisting partner; isolation sparring, commonly referred to as positional drilling, where only a certain technique or sets of techniques are used, and full sparring in which each opponent tries to submit their opponent using any legal technique. Physical conditioning is also an important part of training at many clubs.​

Training and knowing Jiu Jitsu comes with great responsibilities, one cannot just assume any situation calls for violence and fighting. Jiu Jitsu in its purest form can be an asset, if no other options are available, it can allow you to survive difficult situations. It can’t  protect you in situations that involve  weapons  if you have not trained in self defense. Jiu Jitsu was born and bred on the streets of Rio De Janeiro Brazil, in part due to the lack of police presence at the time. Because of the importance and effectiveness of using Jiu Jitsu as a self defense martial art, a person should never go out looking to test their skills. Violence should only come as a last resort and only when other options have been exhausted.

The early days of  Jiu Jitsu were  held in the  highest  regards because of it’s effectiveness in ending a fight quickly, you can see with the early days of the UFC how Royce Gracie used Jiu Jitsu to finish fights. At that time most or all of the competitors knew nothing about ground fighting, and those that did, did not know how to effectively finish a fight. As the years went on competitors knew that in order to be effective in competition they would have to learn what the Gracies and those in Brazil were using for years. If one thing that can be learned is that whether using sport or self defense Jiu Jitsu, either one can effectively finish a fight.

Brazilian Jiu-Jitsu (BJJ) is a martial art, combat sport, and a self defense system that focuses on grappling (in the GI or NO GI) and especially ground fighting. Brazilian jiujitsu was formed from early 20th century Kodokan Judo ground fighting (Ne-Waza) fundamentals that were taught to Carlos Gracie by master Mitsuyo Maeda. (Our lineage = Carlos Gracie > Carlson Gracie > Sensei Edson Corvalho). Brazilian jiujitsu eventually came to be its own art through the experimentations, practices, and adaptation from the Judo knowledge of Carlos and Hélio Gracie (the founding fathers), who then passed their knowledge on to their extended family. BJJ promotes the concept that a smaller, weaker person can successfully defend against a bigger, stronger assailant by using leverage and proper technique, by taking the fight to the ground  -  most  notably  by applying joint-locks and chokeholds to defeat the other person.