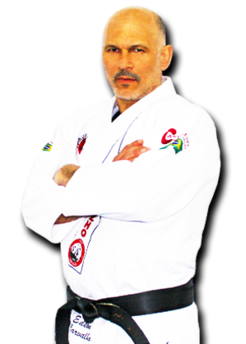 When I started training Brazilian Jiu-Jitsu a little over 3 years ago, I instantly fell in love with this sport.Read more...

Brazilian Jiu-Jitsu (BJJ) is a martial art, combat sport, and a self defense system that focuses on grappling and especially ground fighting. BJJ promotes the concept that a smaller, weaker person can successfully defend against a bigger, stronger assailant by using leverage and proper technique, by taking the fight to the ground - most notably by applying joint-locks and chokeholds to defeat the other person.Read more...

Judo is a modern martial art, combat and an Olympic sport. Its most prominent feature is its competitive element, where the objective is to either throw or takedown an opponent to the ground, immobilize or otherwise subdue an opponent with a pin, or force an opponent to submit with a joint-lock or a choke. The philosophy and subsequent pedagogy developed for judo became the model for other modern Japanese martial arts.Read more...

It is our mission to help you achieve whatever goals you may have. Whether you want to become a Brazilian Jiu-Jitsu or Judo champion, MMA fighter, or just want to get in great shape and the ability to defend yourself, our expertise is at your service.

We have successfully produced BJJ, Judo and MMA champions around the world and we will discuss with you upon joining what your short and long term goals are.

Here at Team Carvalho we stress training both ground and standing. While it is a proven fact that most all fights go to the ground... they all start standing. Only learning ground techniques is only learning half of the fight.
View on Mobile