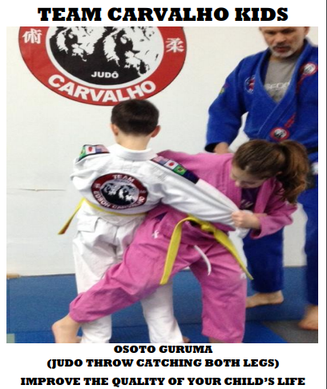 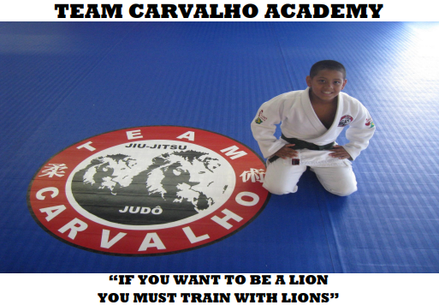 Judo is a great sport for kids of all ages. Kids learn rolling and falling techniques as well as fundamental judo skills. Self-discipline, friends and fun. We’ve got it all. We offer a free trial. Judo is a great activity for kids. It was designed to be that way on purpose.
Team Carvalho Academy is a great place to learn it. It can be whatever the individual needs it to be, whether just a bit of exercise, self-defense, competitive sport, confidence building or a way to make new friends. Our class structure is about developing good basics and physical conditioning. From here, students are able to develop their own style of judo as they mature and progress.
We believe that our kids should earn their stripes. Our grading system de-emphasizes the handing out of grades just for being at training for a set period of time. Unlike many martial arts clubs which have set grading dates where everybody is graded irrespective of their effort or proficiency, we constantly track student progress using our own system which has been developed over many decades of use and is constantly refined. This means students do not make progress through the grades unless they demonstrate that they have made a tangible improvement.

First and foremost, students must demonstrate a good attitude to their training, and to those they train with. From there, they can fulfill the set technical requirements for each level that will allow them to move on to the next. We find that far from being put off by not having a black belt by the age of 9 years, our system encourages our students to stick around longer. Ultimately, we hope it encourages students to train hard to learn, rather than chase bits of colored cloth. Such rewards come in their own time. Old school Japanese Judo has the maxim: The amount of time you spend practicing completely determines your judo. This means that the more you train, the better you get. We have three regularly scheduled classes a week for the kids. Students may attend any or all of these as they wish. Students who put in more training understandably make greater progress in the long run than those who train less.

Some kids like to compete regularly at competitions. Competitions are great fun and range from friendly local events to bigger national level tournaments. We have produced champions at Local and National Level. We do not promote competitions as an end in themselves, but as a way for people to develop their judo further and learn a bit more about themselves. Judo is a lifelong activity. We have members at the Academy who have been training since they were in the junior class and are now grown up and show no sign of giving judo up.

We all worry about our children being able to take care of themselves. The strength, agility and coordination that a child learns from Judo gives them self-confidence. They know that no matter what may happen to them at school or on the street, they will be able to take care of themselves. Many times, this self-confidence translates into the knowledge that they don’t have to fight someone to prove something. Through Judo practice and tournaments, they already know their capabilities and talents.
Learning Judo can teach your child valuable life skills that will help them succeed in areas far beyond the Judo mat.

Judo is an excellent way for children to learn three important values. Judo teaches self-discipline, persistence in pursuing a goal and self-confidence.
Judo teaches self-discipline and instills in the child the idea that his or her own success or failure is a direct result of the amount and intensity of their own effort. The idea of self-responsibility is a major stepping stone to success in life. In Judo, you get out of it exactly what you put into it. Also, since it is an individual sport that the child cannot place blame for failure on others and conversely success is the child’s alone to enjoy.
​
Judo cannot be learned by magic, nor is it learned overnight. The child learns that good things sometimes take a long time to happen. They learn to be persistent in their efforts. They also learn that truly valuable and cherished successes come from efforts that take a long time to be realized.